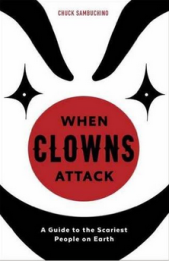 Let’s be honest: Clowns are terrifying. These bozos and jokers walk around doing whatever they want — smashing pies into people’s faces, spraying seltzer down their pants, and occasionally abducting toddlers at birthday parties — and no one does anything about it. Well, that time is over. Now it’s time to take a stand against an even larger (and real) threat: creepy & violent clowns.

Among many other things, the book breaks down the following: