1. You never know their real names. When a clown introduces himself to you, he explains that his name is “Scooter!!” and that he lives “at the circus with other fun, magical people!!” But of course these are both lies. Nothing about a clown’s introduction or interaction with you is genuine. They have a false face and a false name and a false backstory—making them completely impossible to believe—and more important, impossible for police to locate. Plus, a large percentage of clown names are actually code names for hard drugs.

2. They go straight for the children. If you were at a park and a stranger walked right up to your kids and started handing them candy, I’m guessing you would either call 911 or slug him across his Dateline predator face. Yet this behavior is a clown’s everyday M.O. Not only do clowns head straight for everyone’s offspring, they also pass around a bevy of snacks and sugary treats. Best-case scenario: a wired kid. Worst case: the cops are putting out an Amber Alert for your little one. The scary reality is that almost all clowns are men, so breeding large numbers is a centuries- old challenge for the community. Their twisted solution is to grab orphans, street kids, and little ones who wander a little too far away from the minivan, to indoctrinate them into the clowning lifestyle and world.

(Learn how to survive a clown attack.)

3. They seem impervious to pain or injury. Clowns get hit on the head with a mallet, attacked down the pants with fire extinguishers, and slammed in the face with countless pies in metal tins, only to remain . . . perfectly functional. This isn’t slapstick humor; it’s borderline superpowers. But since there is no such thing as superpowers, we must naturally assume this comes from ingesting PCP, a narcotic known to dull the nerves and cause users to feel no sensation, even when breaking a bone.

4. Everything about them is unnatural. Think about it. Everything that clowns do is abnormal, unsanctioned behavior, and even their very appearance is deviant. For instance:
— Their hat? Never the right size. Way too large or way too small.
— Their skin tone? Never a natural human color.
— Their pants? Creepily loose. They could be hiding anything
from a sharpened spatula to a bazooka inside those bad boys.
— Their shoes? Enormous and way too heavy. It takes just one stomp to snap a femur, and only three well-placed stomps to crush a man to death.
— Their laughter? Saying “Hyuk-hyuk!” is in no way normal. Recently, a Scottish scholar discovered the word hyuk has its roots in an Old English verb for “to stab.” So the next time you hear a party clown say “I hyuked the last guy who didn’t give me a tip,” give that joker a tip—seriously.
— Their transportation? Unicycles are dangerous, and clown cars are death traps that defy the laws of physics. .
— Their hair? Never a natural color, shape, or size. More often than not, it’s a clown-fro that looks like a pom-pom stolen from a local high school cheerleader.

5. They do whatever they want, with no consequences. Because clowns occupy a wacky world and profession, they think they’re not subject to the same rules the rest of us are—and that is truly terrifying. If a clown wants to come up to you and give you an over- the-head wedgie, he’ll do just that. If a clown wants to embarrass you in front of your date and slap you in the face with cotton candy or a giant balloon monkey, he’ll do just that. And all of these things are apparently OK—simply because clowns somehow have us all believing that the rules of civilized society, and even the laws of a nation, do not apply to them. 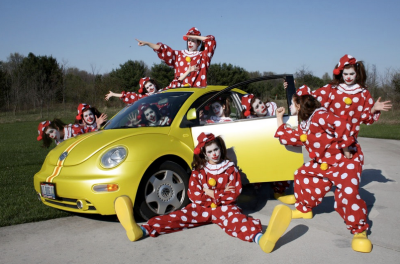 6. They hide their true numbers. “Clowns are pack hunters,” says Dr. Ryan McElvy, circus arts researcher at Columbia University. “You may think a car that just pulled up has four or even five clowns squeezed into it, only to see fifteen pop out. All indicators point to clown troupes being a cover for criminal activities. Clowns have adopted gang behavior in the last fifty years. You insult one guy, and the next minute you’re surrounded by a Cirque du Soleil from hell, all brandishing baseball bats.”