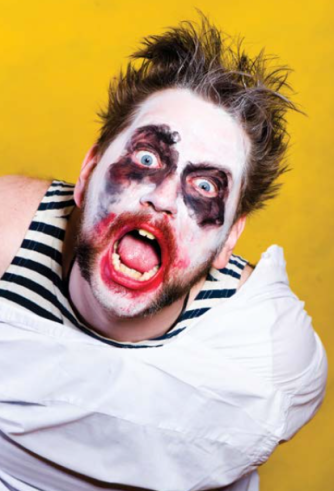 We all know clowns are drunks, but they’re also oftentimes drug addicts, and, in a sick joke, they often TELL YOU their drug of choice in their name? Don’t believe me? Check out these 8 common clown names, and see how the names have roots and origins in  the drug trade.

HAPPY: Any joker with this name is hooked on ecstasy.

FUZZY: Clowns get this sobriquet because of their love of weed, kilos of which they can stash in those baggy pants.

KIBBLES: Kibbles (or “Kib-Daddy,” as he prefers to be called) is your crack cocaine dealer of the mix. Commonly seen juggling flaming torches, this bozo always has a light.

GIGGLES: Master of laughing gas/nitrous oxide. Brought in when civilians need subduing. Rarely seen without canisters and bags of balloons.

Here are some quick tips on how to fortify and defend your home both before and when they come.

1. Lock your windows. Sure, people know to lock their ground- floor windows, but they aren’t as diligent about locking the ones upstairs as well. Clowns will climb nearby trees using their long strands of scarves and throw a grappling hook onto your roof. They can skillfully walk across this makeshift tightrope, and from there, it’s just a few steps to the open window.

2. Set outdoor traps. If you think the painted ones will come for your children, they no doubt will, so start setting up hidden defensive measures on your property. The best way is to dig a deep hole in the ground—ten feet is a good start. Conceal it with some sticks and leaves. On top of the trap, place a tray of delicious funnel cakes and corndogs—because lord knows a joker cannot possibly resist tasty carnival food. Once he takes the deep-fried bait, he’ll fall into the pit and be trapped until law enforcement arrives.

3. Keep your stairs messy. We already know that fat shoes make it tough for clowns to ascend stairwells. But you should also remember that the more doggie chew toys and children’s wheeled toys you have lying around, the more the intruder can step on and fall, making amusing “OW! OOO! EEE! YOWZA!” sounds the whole way down.

4. Have a circus music CD ready to go. If the back door gets smashed to smithereens and you find yourself in a life-or- death clown fight, one of the best things you can do is start a prearranged playlist that blares up-tempo circus music. The clowns will instinctually go into dance routines and joke sketches. It will take them at least of 120 seconds for them to break out of their trance-dance, giving you valuable escape time.

5. Assemble a “scareclown” in your front yard: Create an improvised scarecrow designed to spook off the jokers. To do this, make the scareclown resemble the person a clown fears most: an asylum worker. After all, a clown’s greatest fear is not death but being locked up in a loony bin forever. If a bozo approaches your front yard and sees a psych hospital worker, he’ll no doubt turn tail and head back home.

6. Use anything silly you can find to battle. A clown is hardwired to believe that whenever the conflict is “clown versus silly object,” the silly object must be taken seriously. So even if you hit a clown with a spatula, he’ll flail backward in an attempt to get a laugh. Have flour, talcum powder, or some other fine dusty matter at hand? Blow it at him. He’ll have to sneeze at least six times. It’s always smarter to fight with a silly household item than use your fists. The only exception is a rubber chicken. Clowns are the masters of Kung Pow Chicken.

7. Live next to cops—or better yet, some mimes. Living close to a police officer does a good job of keeping these wackos at bay, but an even better option is to purchase property in a mime- heavy cul-de-sac. As long-time nemeses of clowns, mimes are dedicated to supporting the anti-bozo movement. This means if your house comes under attack from an armada of red noses, a swarm of ninja-like silent soldiers will come to your aid to kick clown ass.

1. You never know their real names. When a clown introduces himself to you, he explains that his name is “Scooter!!” and that he lives “at the circus with other fun, magical people!!” But of course these are both lies. Nothing about a clown’s introduction or interaction with you is genuine. They have a false face and a false name and a false backstory—making them completely impossible to believe—and more important, impossible for police to locate. Plus, a large percentage of clown names are actually code names for hard drugs.

2. They go straight for the children. If you were at a park and a stranger walked right up to your kids and started handing them candy, I’m guessing you would either call 911 or slug him across his Dateline predator face. Yet this behavior is a clown’s everyday M.O. Not only do clowns head straight for everyone’s offspring, they also pass around a bevy of snacks and sugary treats. Best-case scenario: a wired kid. Worst case: the cops are putting out an Amber Alert for your little one. The scary reality is that almost all clowns are men, so breeding large numbers is a centuries- old challenge for the community. Their twisted solution is to grab orphans, street kids, and little ones who wander a little too far away from the minivan, to indoctrinate them into the clowning lifestyle and world.

(Learn how to survive a clown attack.)

3. They seem impervious to pain or injury. Clowns get hit on the head with a mallet, attacked down the pants with fire extinguishers, and slammed in the face with countless pies in metal tins, only to remain . . . perfectly functional. This isn’t slapstick humor; it’s borderline superpowers. But since there is no such thing as superpowers, we must naturally assume this comes from ingesting PCP, a narcotic known to dull the nerves and cause users to feel no sensation, even when breaking a bone.

4. Everything about them is unnatural. Think about it. Everything that clowns do is abnormal, unsanctioned behavior, and even their very appearance is deviant. For instance:
— Their hat? Never the right size. Way too large or way too small.
— Their skin tone? Never a natural human color.
— Their pants? Creepily loose. They could be hiding anything
from a sharpened spatula to a bazooka inside those bad boys.
— Their shoes? Enormous and way too heavy. It takes just one stomp to snap a femur, and only three well-placed stomps to crush a man to death.
— Their laughter? Saying “Hyuk-hyuk!” is in no way normal. Recently, a Scottish scholar discovered the word hyuk has its roots in an Old English verb for “to stab.” So the next time you hear a party clown say “I hyuked the last guy who didn’t give me a tip,” give that joker a tip—seriously.
— Their transportation? Unicycles are dangerous, and clown cars are death traps that defy the laws of physics. .
— Their hair? Never a natural color, shape, or size. More often than not, it’s a clown-fro that looks like a pom-pom stolen from a local high school cheerleader.

5. They do whatever they want, with no consequences. Because clowns occupy a wacky world and profession, they think they’re not subject to the same rules the rest of us are—and that is truly terrifying. If a clown wants to come up to you and give you an over- the-head wedgie, he’ll do just that. If a clown wants to embarrass you in front of your date and slap you in the face with cotton candy or a giant balloon monkey, he’ll do just that. And all of these things are apparently OK—simply because clowns somehow have us all believing that the rules of civilized society, and even the laws of a nation, do not apply to them.

6. They hide their true numbers. “Clowns are pack hunters,” says Dr. Ryan McElvy, circus arts researcher at Columbia University. “You may think a car that just pulled up has four or even five clowns squeezed into it, only to see fifteen pop out. All indicators point to clown troupes being a cover for criminal activities. Clowns have adopted gang behavior in the last fifty years. You insult one guy, and the next minute you’re surrounded by a Cirque du Soleil from hell, all brandishing baseball bats.”